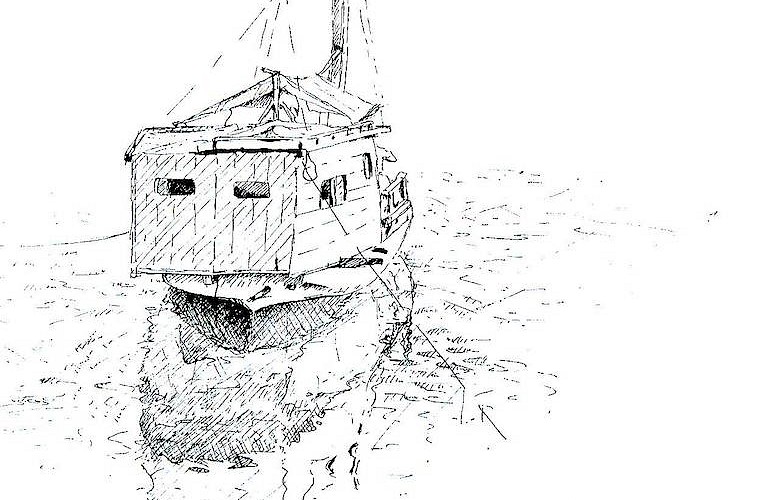 A housebout in Labon Bajo on the Indonesian Island of Flores

In April of 1995 I finally took off for Bangkok on a trip that had been in the planning stages for perhaps a year or more. I had had it in mind to travel from Bangkok to Sydney without once taking to the air if I could possibly manage it. What lay before me was a litany of gruellingly arduous bus journeys and absurdly overcrowded seaborne voyages - via a succession of barely serviceable rust-buckets - through the long chain of islands that form the Indonesian archipelago, before eventually finding that I had no other choice but to take to the air for the short hop from Kupang, West Timor, to Darwin in Australia’s Northern Territory.

Backpacking can prove to be a rather forlorn and lonely occuption at times and a hectically sociable one at others, with the two extremes alternating at irregular intervals. For those lonely, pre-gadget times I usually relied upon the company of a good book, which, upon completion, I would either trade or swap whenever the opportunity arose; my other companions being a sketchpad and a pencil case that was home to a collection of variously sized ink drawing pens. 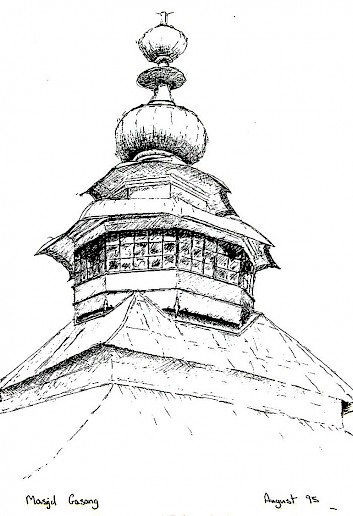 Drawing with graphite pencils has always been second nature to me, and so pen and ink was a completely new discipline. I was attracted to the indelible, pitch-black marks that the discipline of pen and ink imposes, as opposed to the gradual building of line and shade that is the default technique of graphite pencil drawing. The requirement for boldness, and the necessity of living with ones mistakes, was a challenge that I relished and a potential release from the perfectionist tendencies that were forever compelling me to reach for my eraser. It also seemed an excellent medium for getting sights and impressions down relatively quickly onto paper, an attractive proposition when perched by a dusty roadside or suddenly surrounded by a crowd of inquisitive locals; personal space so often being less of a social barrier in that part of the world than I was otherwise accustomed to.

One of the great joys of sketching, as opposed to photography, is that the intense study and the timescale required in undertaking a drawing project invariably tends towards a deeper understanding and perspective of the subject matter at hand. During the course of a work I would often find myself contemplating the nature and purpose of a structure’s existence and appreciating the impacts that time and the elements had had upon its appearance. It should be mentioned that my instincts were leaning more towards man-made entities than towards more natural ones such as plants, trees or mountains etc. I have no explanation for this preference other than that’s just the way it was with me at the time. In fact, I had given it practically no thought at all until writing these very words some quarter of a century after the events in question. 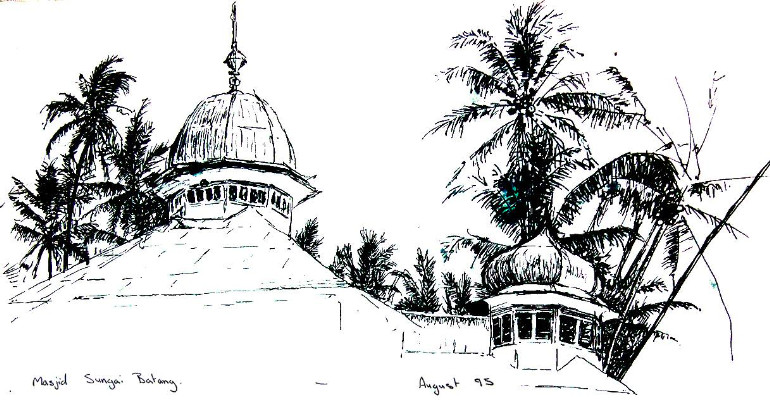 Yet another revelation of travel sketching was the structure and routine that it afforded me in an otherwise order-less existence. Aside from the necessity of catching the occasional bus, boat or train, there often was not a great deal to define the average day. The sun would rise and I would awaken and then night time would come around and I would descend into sleep. In between these two events my time would invariably pass in a fog of eating, reading, wandering around and occasionally drinking to excess. For those occasions when more than one sitting was required, in order to complete a particularly detailed sketch, I made it my mission to always work at the same time of day, thereby ensuring consistency of light and shade. This routine, and the ensuing sense of achievement, made subsequent relaxation possible without the niggling sense of guilt that being unproductive and aimless can so often engender.

Being a backpacking artist is, in many ways, akin to being a travelling musician, in that one often becomes something of a celebrity amongst both locals and fellow travellers alike. Several times I was called upon for impromptu portraits, and even on one occasion to be the artistic creator of a prospective tattoo. It felt good to be useful and to be the bearer of gifts in the form of highly personalised mementoes that might well become cherished possessions. 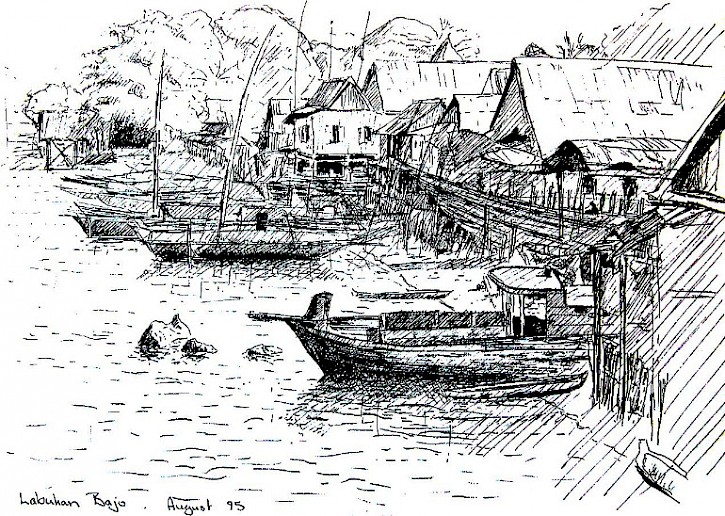 One of my most memorable sketching experiences came about when I chose to depict a ramshackle boatyard in the port of Labuan Bajo on the stunningly exotic island of Flores. This particular piece turned out to be the most challengingly detailed project of the entire trip and it was as well that the rickety, wooden veranda of my guesthouse provided both comfort and convenience, along with an expansive view of my proposed subject. An added bonus came in the form of lengthily comfortable periods of time spent in the company of the vaguely employed staff, whose numbers seemed somewhat more than adequate for the sparse chores at hand. Over the course of several proceeding years and much travel, it was to gradually dawn on me that these young men were almost certainly members of an extended family, which served the purpose of providing employment where none might otherwise have existed. Needless to say, portraiture made up a good proportion of my time, but I was happily content with my lot, as loneliness and idleness were not part of my daily existence. 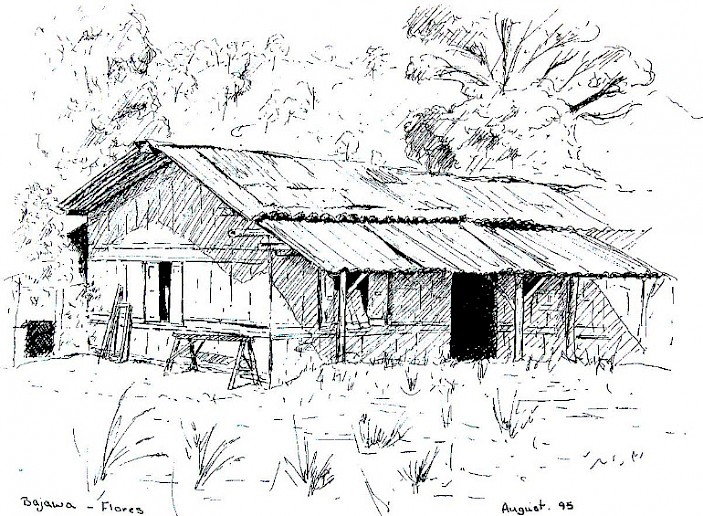 Following on from my stay in Labuan Bajo, and my pen & ink sketch of its boatyard, I subsequently found myself further on down my eastward path and staying in a small town named Bajawa. I have absolutely no memory of this place other than of making a pen & ink drawing of a small, wooden shack. The dominant memory of that particular project being the large gathering of perhaps twenty or more villagers that surrounded me as I struggled to complete the picture and good naturedly teasing me with loud comments along the lines of: “no good mister!”

Upon reaching Australia I found that the inclination to sketch had quickly become subdued, almost certainly due to the necessity of finding work in order to supplement my rather meagre funds. Stress can often prove to be rather a dampener on the creative instinct, although on reflection I might have done well to try my hand at becoming a street artist. I find it odd that this thought occurs to me only now as I write these very words almost exactly twenty five years later. A stop-start journey with a handful of various attempts at manual labouring jobs and fruit & veg picking followed before my eventual arrival in Sydney, some five months out from Heathrow Airport’s Terminal 2. I did however manage to do a few sketches, most of which remained incomplete, but looking back through my sketchpad now I feel a connection with those times that photographic images rarely imbue. For me, these sketches seem to capture far more than just mere moments in time and serve to evoke many feelings and emotions that I was experiencing during this particular period of my life. 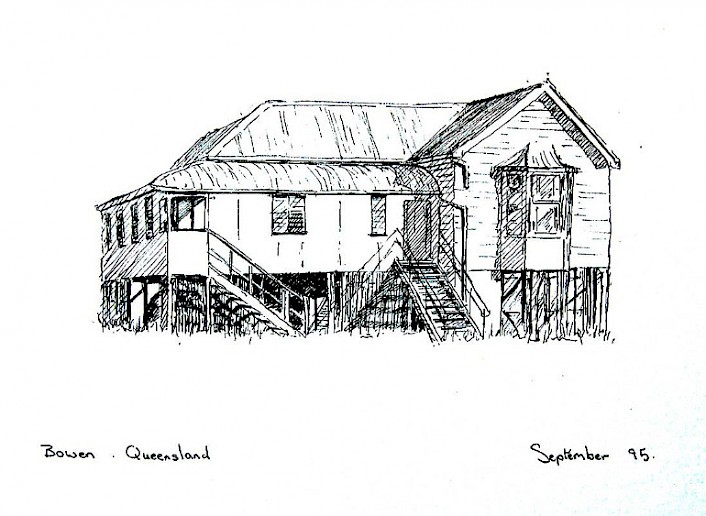 My fervent hope is that you will have enjoyed reading this particular blog as much as I have enjoyed creating it. My next project will be to add colour to printed copies of this collection of sketches, which will form the basis of a future blog and which I hope will bring you as much pleasure in reading and viewing it as the creating of it will undoubtedly bring me.

Cartera template, made and hosted by Suspire Media.